Where do these silly expressions come from, nobody knows.

Where are the happy news stories? Do people only love depressing news or is it merely the journalists who think this. Personally a nice quiet life full of love and happiness does it for me.

Lady approached me in my corner cafe this morning. “You’re the famous author.”

“Well not famous yet.”

“Down here you are. I’m also a writer and playwright.”

“Maybe we should get together and you can write the film script!”

Well of course we all dream which is what life is all about.

Apparently Tarot card reading is the new thing. Has Luna stolen a march on them. https://www.telegraph.co.uk/news/2018/08/18/millennials-turning-tarot-readings-technology-brexit-have-left/ 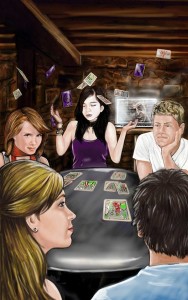 Yes they’re all the rage. 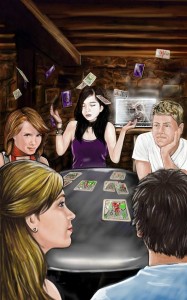 Heather stood at the back high enough to see over the heads of the others, picking out the heads she knew and the one that she desired. Love could be a wonderful experience, if the novels in her bookcase were anything to go by, although she had not yet had the full experience yet. Well from her side she had, but it was all in her mind as she lay sleepless at night dreaming of romantic candlelit dinners.

But it seemed as if the object, sorry person, of her love was oblivious of her, despite all her efforts to be noticed. Maybe he was also shy and not versed in the ways of true love. In fact, he was the reason she was standing here in the first place.

She had met him in the local café where he sat in a corner, nursing a large cappuccino, huddled in front of his laptop. Well ‘met’ was probably too strong a word, she had passed him and said “Hello,” and he had muttered something but that may have been at something on his screen. Hiding behind a newspaper she had snapped a picture of him engrossed in his work, which she had blown up and was now hanging in her bedroom.

She heard the barista greeting him one morning, after she had set her alarm early to catch better look at him. Paul was definitely the man of her dreams, tight chinos showing off his athletic legs, chest hugging blue shirt, highlighting his toned torso and a brilliant smile as he greeted his server. Once he had gone she quickly got up for a refill.

“Yes too good looking for his own good,” replied the barista. “Bit wrapped up for me though.”

Because of copywrite in fringements, you’ll have to buy the book once published to read more.

New twist, on an old saying, as robots and computers ‘think’. No they just gather facts and spout them off as if they thought about them.

Until such time as a computer writes an original poem; writes a fictional book or comes up with an original scientific, thoery they are just our puppets.